Several summers ago I was camping with a group of friends and decided to take Lewis for a walk. I think it was late summer in Eastern Washington, and the ticks were out with some force. Not that that is a necessary point in the story, but I just wanted you to know there were lots of ticks.

Anyway, Lewis and I are walking through a wheat field. Okay, wait, it couldn't have been late summer because the wheat was still green. So it was whatever time of year wheat is green and about three feet tall and there are lots of ticks.

So we are walking, or rather I am walking and Lewis is frolicking. Keeping in mind that Lewis is only eleven inches tall, he can't exactly see over the three-foot-high wheat. Lost in my own thoughts, it took me a second to register that Lewis's wheat frolicking movements were headed toward the five foot cliff and the rushing river. Next thing I know, the little guy emerges from the wheat field and flies off the cliff, splashing into the rushing river.

Initially he swam for an island, but at the last minute he looked over his shoulder and saw me standing on the opposite shore, so he changes course and attempts to swim for me. Meanwhile he is being swept away, and I am running (yes, Cherelyn, I did run) along the edge, trying to figure out where I can jump down and try to grab him.

He sweeps by an eddy, just out of my grasp. Then he gets snagged up in some debris further down the river. In a moment of Indiana Jones bravado, I grabbed a dangling tree root and repelled down to where he was, only to have him be swept under the debris and come out on the other side.

Fortunately there was a sandbar on the other side that he swept onto. I told him to stay there, climbed back up the cliff, trotted down to the sandbar, and hauled him up to safety. And I'm telling you, if a dog could talk, this is what he would have said: "That was awesome! Can I do it again?!"

I think this experience could be taken two ways. One way is to tread safely and slowly through the wheat, making sure to check carefully before plunging ahead. Another way is to frolic while you can, swim like crazy, and no matter how scared you were, look at the whole thing as a great adventure. I think I'm with Lewis on this one. 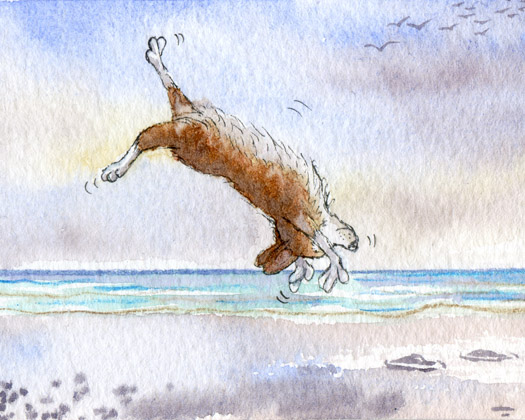