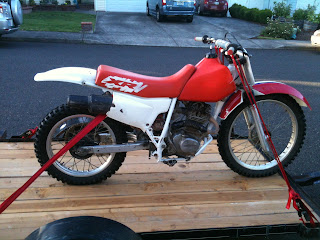 Above, you will see my most recent acquisition. Having ridden dirt bikes in the past, I had some nostalgic recollection of the activity. But as seems to be the way with most things of late, experiencing this activity in my thirties has opened my eyes to a new and better understanding of the joys of dirt biking.

First off, there is quite a sense of freedom going out, firing up my own bike (that I can actually get kick-started with minimal effort), and riding off into the sagebrush.

After purchasing this bike, I was a little timid on my first ride, trying to force the bike to do what I wanted. Recently, however, I have been trusting it more. Instead of fighting where to bike wants to go, I go with it, trusting in the off-road tires to manage to terrain. And after that . . . I started having fun.

Riding this bike out on the open plains, wind whipping by, surrounded by nothing but nothing. . . I highly recommend it.
Posted by Amanda at 9:30 AM 1 comment:

The Gift of Adversity We've all heard it before, something about a piece of sand, an oyster, and a pearl. Or there are those perseverance motivational posters, which of course make me NOT want to persevere just because the posters are so darn upbeat.

But there is something about being a little older and wiser than I once was that is causing me to understand that many of these vague tidbits of philosophy are actually true.

I remember being in junior high, and there was some class where the teacher was talking about the difference between eustress and distress. Eustress being the type of stress that causes a positive response. In our sand and oyster scenario, I suppose this would be the bit of sand that turns into a pearl as opposed to distress, which would be like the oyster getting sandblasted. Probably no pearls there.

What I'm getting at here though, is that I'm starting to experience this concept and actually be able to cognitively reflect on it. Not that my life is particularly adversarial or anything. I'm just saying that I see a more diligent side to me when I am faced with some kind of stressor.

Busy day at work: more gets accomplished in a more diligent and efficient manor. Slow day at work: eh, I can do that later . . .

Perhaps everyone else is ahead of me on this one, so I apologize if I am stating the obvious. It's just that I've been a lot more aware of my pieces of sand that have become pearls.
Posted by Amanda at 9:42 PM 3 comments: Back when I was a kid, I remember my mom buying a handful of fireworks for me and my brother for the 4th of July. Longingly, we gazed at the packaged fireworks for days, anticipating the long-awaited night when we would be able to light them off. Occasionally, we would get to light one off on the 3rd, or we may be able to wave a sparkler around as a special treat leading up to the big event.

At our house, "the big event" usually lasted 10-15 minutes max, at which time we would light a couple little fireworks and grin giddily as they spun around and squealed some high-pitched noise. Fifteen minutes later, the whole show would be over, and we would head back into the house, satiated for another year.

I don't know if it's my increasing lack of tolerance for noise, my ownership of a particularly skittish dog, or if the private firework shows are actually getting longer, louder, and higher, but I would like to cast my vote for a quieter 4th of July.

Having never been engaged in active battle, I can't speak from experience, but it's my understanding that the 4th of July is to commemorate our freedom. And while I understand freedom is often gained through wars and battles, is it really necessary to commemorate our freedom by bringing back memories of rocket blasts? Can't we just celebrate with the family bbq? I can tell you, Lewis would have a much happier time celebrating his freedom with people dropping hot dogs in his mouth instead of trying to hide under the couch while the world outside goes crazy for several hours. So maybe we could step back a little. For the sake of all skittish dogs and middle-aged women gaining an increasing lack of tolerance for noise, is there any way we could scale back to sparklers and a couple of fireworks that spin around on the ground and squeal, then call that good for the year? If you want the big show, there is always Fort Vancouver on TV. It was just a thought. . .
Posted by Amanda at 9:25 PM No comments: