A Horse, a Fog Bank, and a Bellowing: Tale of a Fog Monster

The density of the fog intensified as Copper took somewhat hesitant steps away from his herd mates into the white mist. Merely a few minutes earlier, when we started out, the fog wasn't too bad. I could see a good hundred feet ahead of us. The sagebrush began to take on progressively eerier shapes, however, as the moist particles seeped in, combining to form a solid shroud. What seems like suddenly, a hundred feet deteriorated to only a couple. The whinnies from Copper's herd mates diminished in the damp air behind us.

Suddenly, Copper stopped short. Off in the distance, to our left and no telling how close or far away, we had heard a bellowing. Knowing there was a dairy in that general direction, I told myself it was only a cow and urged Copper forward. We had only walked a few more steps when the bellowing came again. This time Copper turned quickly and started to head back to the safety of his herd.

I pulled him around and squinted into the fog (for whatever reason, it seems that squinting is a logical exercise that will make seeing beyond dense fog easier). With significantly less gusto, I urged Copper on, slightly less convinced that that noise came from a cow. 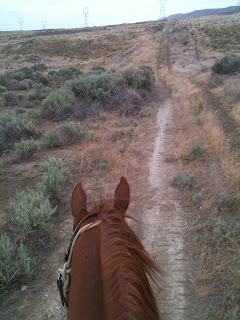 By the third bellowing I decided that now was not the time to throw caution to the wind. The horse wants to go back, let the horse go back. Clearly he's thinking a noise like that can't come from a harmless cow, so best to hightail it out of there before things get bad.

After a safe return, I recounted the bellowing story to my friends. Instead of sympathy for my plight and support that I did the right thing, my uneasiness was met with guffaws. "You let yourself get scared by a cow?! Bahahahaha!"

"It wasn't a cow! It was a bellowing!" (snicker snicker).

I sighed and gave up, knowing only Copper and I would know what we really heard. That night as I drifted off to sleep, the door cracked open to the outside for a breeze, I heard the sound of cows from the dairy . . . mooing.
Posted by Amanda at 10:14 PM