My dog Lewis is learning that the senior years aren't so golden. Plagued by a degenerative nerve disease, he drags his back legs around, scraping every last inch of toenail he has down to the toe bones. Fortunately someone came up with the brilliant idea of fake dog nails to save people's hardwood floors. I use them to save Lewis's back toes from utter annihilation.

Another misfortune of Lewis's elderly state is a large growth that sprang up seemingly overnight on the top of his head. Starting as a tiny bump, Lewis's "second brain" grew exponentially over a few short months to the size of a large grape. Supplied by arterials, the brain was discolored and veiny. It also had a few bumps on it where it had healed from my attempts to excise it with a needle. I finally decided something must be done.

A day trip to the local vet provided the venue for the last of the offending brain. However, when I picked Lewis up later that evening, he was still quite altered from the tranquilizers he had received. Now, a normal dog on tranquilizers is interesting enough, but put a dog with degenerative nerve disease on tranquilizers . . . you have a rag doll. And anyone who knows Lewis knows that he doesn't like being a rag doll.

Fraught with anxiety, Lewis feels the need to be at a heightened level of attention at all times. Despite his default state, the tranquilizers left him half flopped over on a regular basis. I found him by his food dish, half sitting, half laying, doggedly picking kibble out of his dish despite his perpetual fog.

When his countenance finally cleared, he had a new challenge on his hands: itchy stitches. Some dogs, because they are dumb and don't see pain as a sign to stop what they are doing, have to wear those cones after surgery. Not Lewis. He's a respecter of pain. One toenail scratch on those stitches, and he hasn't touched them since. But that doesn't keep them from itching. 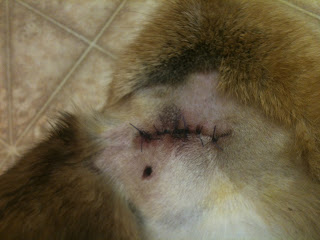 Good thing for him, I know how to scratch his stitches without hurting him. Multiple times a day he jams his head under my hand, demanding I scratch his stitches. Scratching them puts him into a coma-like trance where he tilts his head at indescribable angles and closes his eyes. If he's really getting into it, he will lean too far, his nerve disease will keep him from catching himself, and he will fall right over.

Lewis's stitches come out in a few days. I assume the scar will still itch from time to time, and he will want me to scratch that too. Eventually his nerve disease will take him. I will miss his idiosyncracies, his endless anxiety, and his demands for me to scratch his stitches.