My dog has tail feathers. Also affectionately referred to as his pants, Lewis's tail feathers are long and flowing in the winter and clipped short in the summer. 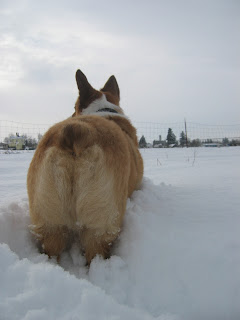 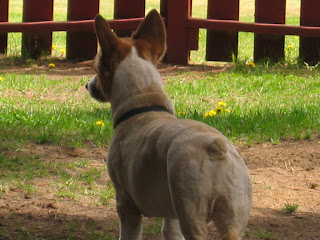 Lewis's tail feathers are quite talented and can do multiple things. For example, the other day we were hiking out on the bluffs by the Columbia River. Being the gorge, it was quite windy. Lewis, having a "Born Free" moment, was standing on the edge of a cliff with the wind at his back. His tail feathers were splayed out nicely by the wind. Had they been slightly longer, he may have been able to base jump with them.

His tail feathers also almost act as a blanket. Right now he is lying in his slumber ball with his tail feathers arranged nicely beside him. Just a few more inches and he could pull them over his bottom, creating a bottom cozy.

I could also braid his tail feathers if the mood struck me, or they could become tail feather dreads. My favorite time of year though, is when they get shaved off for the summer. He can strut his stuff for the doggie ladies, displaying his muscular set of glutes, getting ready for winter and the fresh set of tail feathers.
Posted by Amanda at 6:48 PM