My rental house has this quaint little closet in which resides the smallest washer and dryer set ever manufactured. While forcing my t-shirt and one sock into the washer, I noticed a movement to my left. Gliding deftly down from the ceiling was a little spider. When he got to about four feet from the floor, he ceased his descent and proceeded to simply hang there.

Being, in general, a friend to all things living, I shut the closet, assuming the spider would eventually climb his way back up his web and move to another location. Around midday, I was putting the clothes from the washer into the dryer and found the spider still dangling in the same place he was before.

Wanting to know if this was normal arachnid behavior, I texted a friend to get her opinion. She decided the spider just wanted to swing and suggested I give him a push. Having none of playground shenanigans, the spider splayed his legs and acted rather startled as he swung back and forth. Nope, he must not want to be pushed, I decided.

Shortly after, I completely forgot there was a spider hanging in my laundry closet, and I nearly smashed my face into him while organizing my recycling bags in the closet. 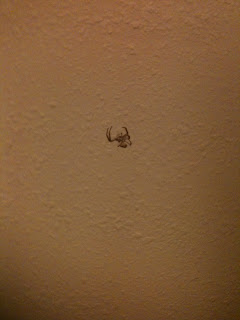 So there he is, at this very moment, in all his glory. If he's still hanging like that tomorrow, I will relocate him outside. While it's be great having him hanging there and all, enough bizarre spider behavior is enough.
Posted by Amanda at 9:40 PM